S1 Biopharma is developing first-in-class drugs to treat sexual dysfunction in both women and men. The company’s therapies are non-hormonal, acting on the sexual centers of the brain by restoring the natural balance of key neurotransmitters. The scientific basis for the development of these drugs is the Kinsey dual control model, which states that sexual arousal and associated behavior are modulated by mechanisms in the brain that involve the balance of excitatory and inhibitory systems through neurotransmitters.

S1 Biopharma’s lead product, Lorexys, is a novel pharmacologic entity clinically designed to the highest safety standards for the treatment of hypoactive sexual desire disorder (HSDD), the most common of the female sexual arousal disorders. Lorexys’ oral formulation acts on the central nervous system to deliver therapeutic benefits and can be used as either a stand-alone or as an adjunct to other therapies for the treatment of HSDD in women.

Lorexys is followed by three other candidates in S1 Biopharma’s pipeline that have the potential to safely and effectively treat the entire spectrum of sexual dysfunction in both women and men. 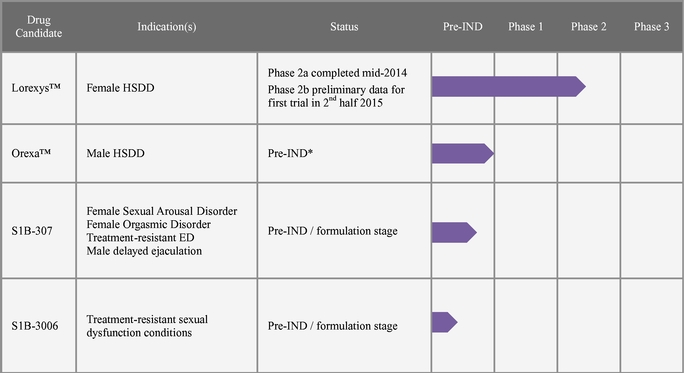 Sexual dysfunction comprises a group of disorders that cause a distressing reduction in the ability to respond sexually or to experience sexual pleasure. For most cases, doctors have few effective treatments to offer these patients. Off-label use of hormones, such as testosterone, and talk therapy are both prescribed, but neither has been shown to be effective consistently. Long-term, off-label use of testosterone, in particular, can have serious side effects in women. In recognition of the unmet need for effective treatments, the FDA has explicitly prioritized female sexual dysfunction (FSD) as a disease area that must be addressed over the next three years as part of the agency’s Patient-Focused Drug Development initiative.

Sexual dysfunction appears as the lack of desire, arousal or orgasm, or as a sexual pain disorder. These kinds of problems frequently overlap and can be generalized or situational. The generalized subtype is a clear target for drug treatment because it seems biological; for instance, HSDD is associated with dysfunctional changes in brain activity when women (or men) are exposed to sexual content. The situational subtype of FSD is a significant issue as well: surveys show that issues between partners are highly related to female sexual dysfunction. However, it is not clear how often conflicts between partners lead to FSD versus how often FSD leads to partner issues. FSD may often become chronic, leading to partner issues
Another set of FSD subtypes is acquired and lifelong. Lifelong lack of sexual interest, though a recognized entity, is unlikely to produce distress and thus to warrant treatment or even a diagnosis. Acquired FSD is likely to cause distress because women with FSD who had a good sex life previously miss it. As a result, women and their partners may become bothered, frustrated, and unhappy about losing it.

The most common of the sexual dysfunction disorders diagnosed in women is hypoactive sexual desire disorder (HSDD). It is diagnosed when a woman has reduced desire for sexual activity and experiences distress or interpersonal difficulties as a result. In a U.S. study of 30,000 women, it was found that 10% met the diagnostic criteria for HSDD. In the newest addition of the Diagnostic and Statistical Manual of Mental Disorders (DSM-5). HSDD is incorporated into the diagnosis of female sexual interest/arousal disorders (SIAD). There are currently no FDA-approved drugs for female HSDD or SIAD.

The DSM-5 also includes a diagnosis of male HSDD. There are an estimated 16 million men with this diagnosis in the U.S. and Western Europe. Testosterone and treatments for erectile dysfunction are typically prescribed for male HSDD. However, the use of testosterone in a man whose levels are normal has unclear benefits, and the medications approved to treat erectile dysfunction do not address the low desire that can stem from neurotransmitter imbalances in the brain. Male HSDD, like female HSDD, is an established diagnosis with inadequate treatment options today.